I was always fascinated by fractals and the principles behind. The more we know about it, the more we can influence the results. And thinking about this the Butterfly Effect is made visible by fractal art. From this perspective it is always wrong not to do something by thinking it won't have any effect. It always has. And the more we collect experience, the more we can influence the results. Gem Preiz opened my eyes how far it it possible with programs for fractal art. The period of time I follow his artistic development in Second Life he climbed up from one highlight to the next. His fractal works are not just beautiful, they are breathtaking and they tell stories. I never could imagine before that this could be possible with fractals. Today opens "Cathedral Dreamer" at LEA6 as monthly installation. As an addition to the builds he created 4 machinima which I embed here.


Gem gave me a preview which starts at the center of the sim as a symbol for the choices we have in live. First we walked on grass to the East Structure, where we find the base of all life: The water. Gem comments: " A submarine world ... almost out of human reach, evokes the life and invites to contemplation. I would like people to open wide eyes as I do when I travel in the nature and resource myself." Watch here the related machinima:


Hall 2 is at the opposite in the West:


It shows ruins and jailed persons. I was very much reminded of Tibet with its thousands of destroyed monasteries. Gem commented: "It is some kind of pessimistic vision of Human frenzy; building and building more and more. But all human construction being spoiling earth and in any case doomed to destruction after a while and this world imprison people in their own frantic life."

Gem continued: "In between these two extremes : contemplate and enjoy nature passively and particpating in the frantic movement of the world there is a medium term .... which the third hall. A way to escape and keep enthusiasm." We went to the Northern hall.


Gem: "I think you always have to face your own doubts when you try to create, or involved in an ambitious project. They slow you down, or make you give up but if you go on and believe in yourself you reach your target. Maybe you know since my temples exhibition that I am fascinated by cathedrals and huge human construction. Something is fascinating me in them. It is that their conceptors were sure of something : that they would never see the end of the work like Gaudi in Barcelona, who created a project for several generations. The hall is conceived as the room where a gigantic project would have been exposed before being realized, showing various aspects to visitors, or future builders. These 12 ones are showing different reactions, from the one who doesn't care, or disbelief to the one who makes the project his. There is a balcony above the door, that can be reached by the teleport dots which shows some black and white views, in an architectural drawings style." 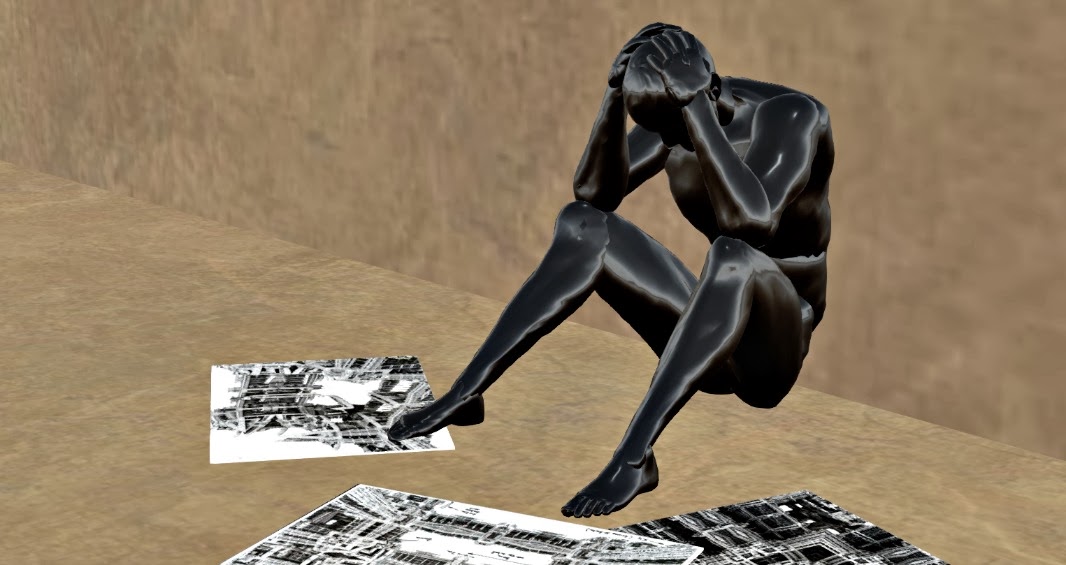 "This is the one who imagined that. between concentration and despair thinking he won't be able. This is the danger of dreams. They bring you to the heights .... but beware the fall!"
And this is the machinima for hall3:


We continued the visit at the hall 4 in the South.

Gem: "The last hall is very different. The reality fades. When you get rid of all material things and look for something more spiritual...People find solution to their problems in life and towards life. Either in the life itself, and action or in spiritual activity." The shown fractal work are of reduced complexity to the maximum which causes a contemplative mood.

And here the last machinima: