This gallery has always a lot of interesting exhibitions. "American Signs" is a tribute to American roadside architecture with the typical neon signs. Melusina Parkin has the analytic eye to reduce the things she is seeing to the essentials.

Aakriti Arts is showing four new interesting exhibitions by Artare, Asmita Duranjaya, Ginger Lorakeet  and Vaiuna. Vaiuna's style is a bit comic-alike and funny. I found the works very sweet. And of course you still find there the current LTD collection as well as Ranadeep's works. 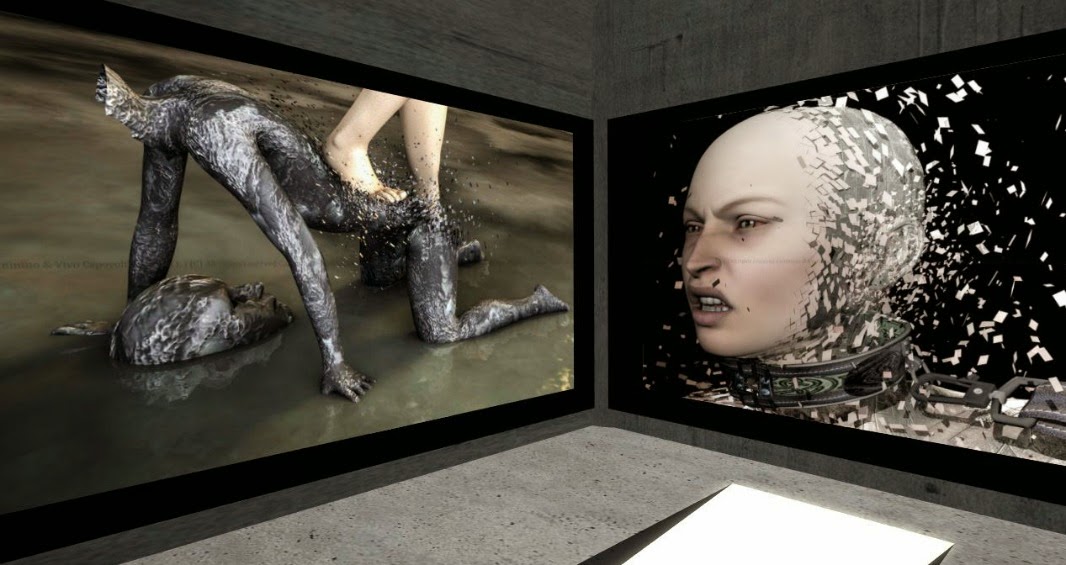 Aneli Abeyante again has a great choice of artists on display. I especially felt in love with Mistero Hifeng's new works. The other artists are Nino Vichan, Ragamuffin Kips, Ranadeep and Paola Mills

Whiskey Monday caught with her images a fast growing group of admirers. She dealt openly with her many hassles in real life which made her works do authentic. I think no other artist presented herself that vulnerable. After the success of her blog she started to exhibit in Second Life too. She suddenly stopped creating 5 months ago due to depressions as she wrote in her blog: http://whiskeymonday.com/ 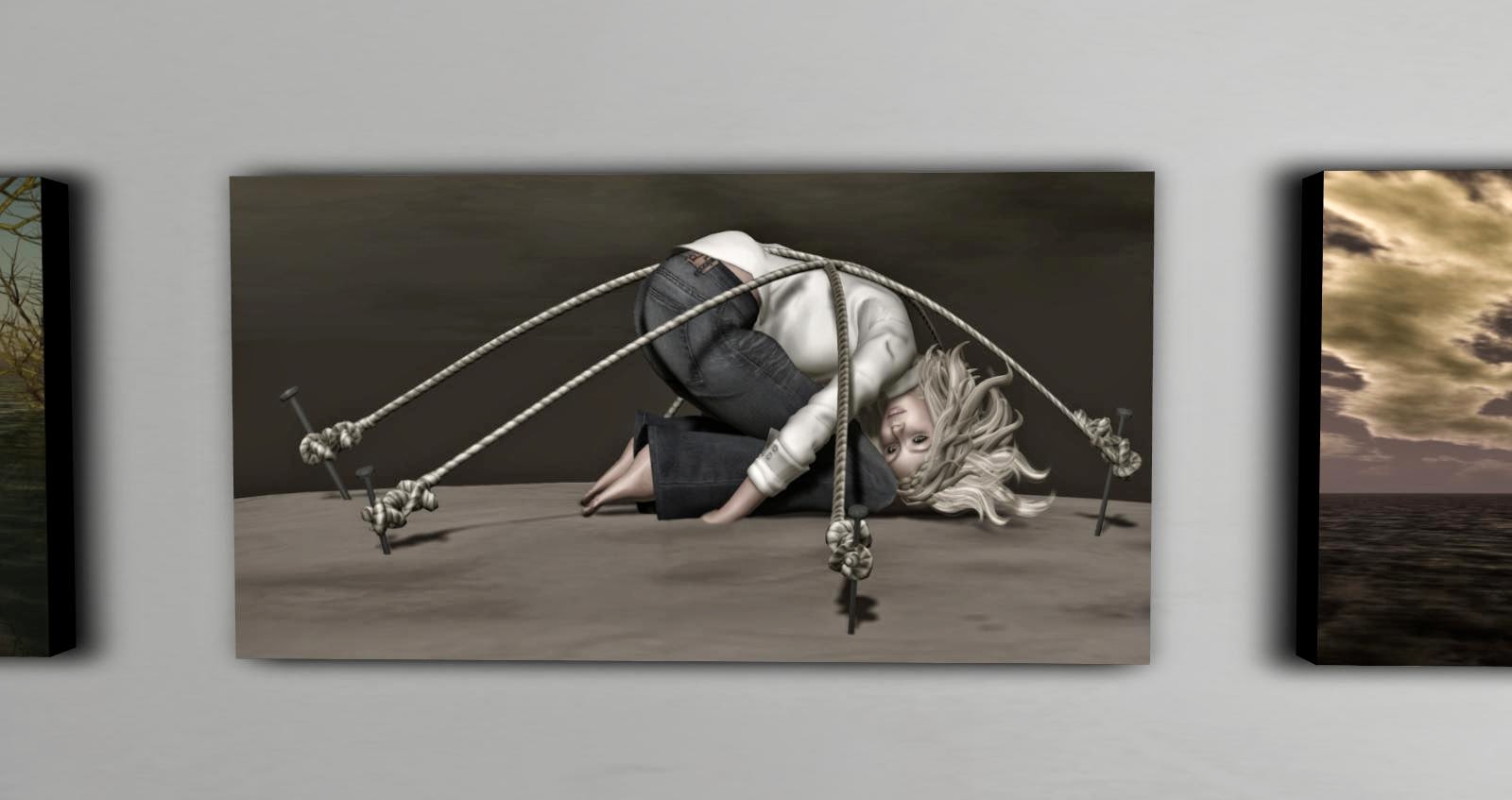 Her friends decided to take her gallery down and this is the last chance for you to see the works inworld until she decides to come back.

Exhibtion in Real Life and Second Life - THE REAL AVANT GARDE IS HERE!


Most of the readers will already know: Today opens in Second Life an important Multimedia exhibition-installation about the Russian Avant Garde, created in Real Life by Peter Greenaway and Saskia Boddeke (Rose Borchovski in Second Life), curated by Olga Shishko and Elena Rumyantseva. The center part of the exhibition with more than 400 pieces is  a multiple screen show around the most influential artists like Kazimir Malevich, Vladimir Tatlin, Wassily Kandinsky, Alexander Rodtschenko, Wladimir Majakowski, Ljubow Popowa, Wsewolod Meyerhold, Pavel Filonov, El Lissitzky and Vera Yermolayeva. The artists are represented with quotes performed by 18 actors. The installation opened in the Manege in Moscow on April 14th. See here a teaser:

The event is running until May 26th and is accompanied by several events around the history of Russian Avant garde. More here: http://ukrussia2014.ru/en/event/golden-age-russian-avant-garde/

As far as got from the Russian media coverage (badly translated by Google) the multimedia show is an intriguing introduction to the artists of the short art period between 1910 and 1930. But it is an artistic interpretation, not a scientific documentation. The educational part is covered by the related events to the exhibition. I think that is really needed. I still ask myself why some of the most important artistic movements at the beginning of the last century, Futurism, Bauhaus and Avant Garde ended in totalitarianism and if and how it played a role in the progress. But maybe we will have the chance to see the exhibition in other parts of the world too as I could read some guesses that the show has good chances to go on tour, for example to London. Sadly I could not find a single word about the installation part in Second Life, which is to me most interesting and the real life visitors can walk in Second Life with given avatars:


The Second Life artists Bryn Oh, Alpha Auer, Nessuno Myoo, Jo Ellsmere , Caer Balogh , Soror Nishi and Eupalinos Ugajin built the virtual part. You should not miss the fascinating works. I will not cover the details. You find them in the post I did yesterday for the LEA blog here:

The excellent text has been written by Bryn Oh and Alpha Auer and also the photos for that post has been taken by the artists. You should read it to know more about the works. 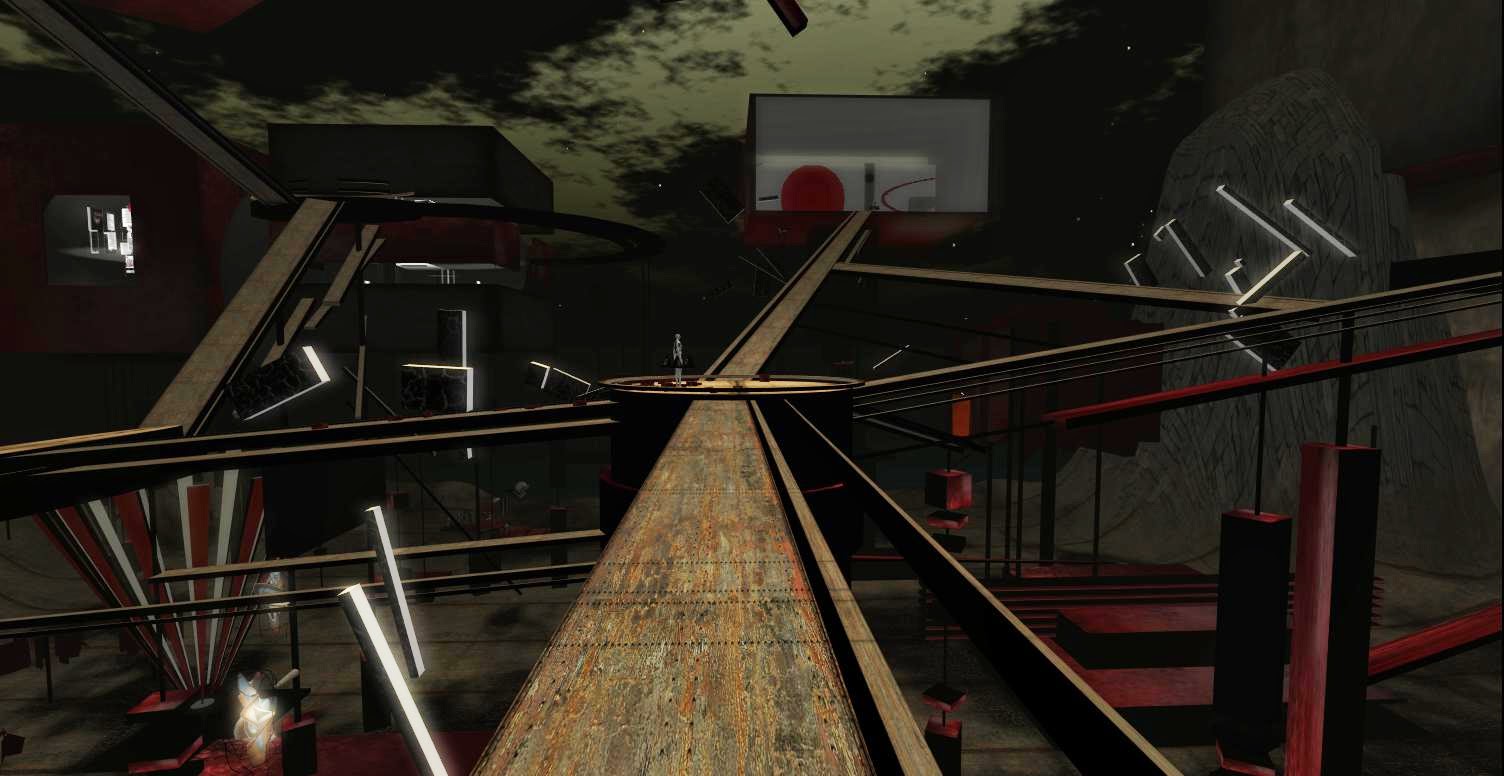 Let me just add some comments. First of all Bryn Oh deserves appreciation. Since January she worked countless hours at LEA8 to create the structure for the works and if you do not know that it is made by her, you would not see on first glance. Bryn, as all other artists, did an excellent job to make Avant Garde possible in 3D and to match the style as much as possible. 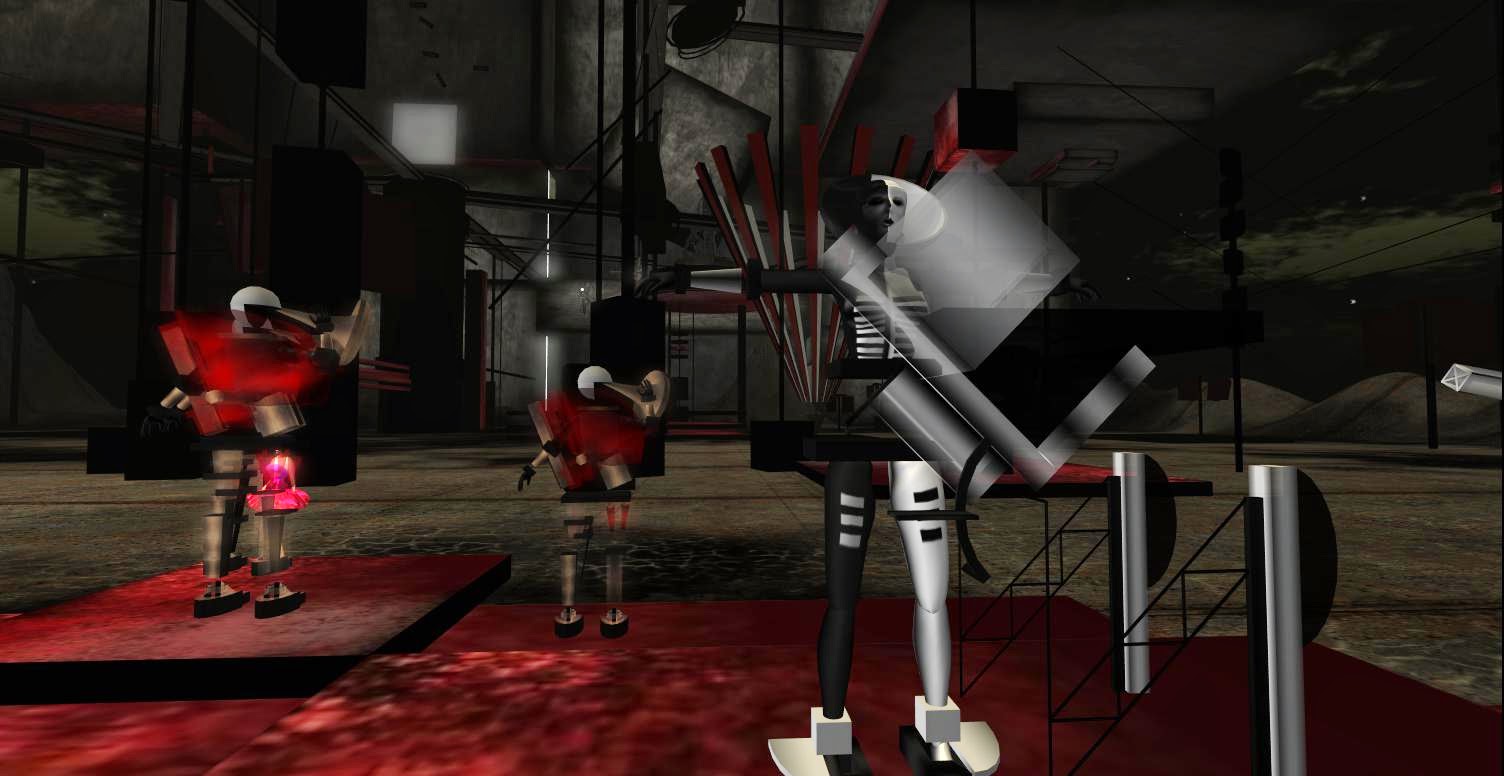 And secondly Alpha Auer should be emphasised who created a huge choice of avatars for the visitors. And if you wear one of Alpha's avatars that she gives as free gifts you ARE, you FEEL Avant Garde. This kind of immersion a real life exhibition never can give. Bryn for example built a tower that never has been realised in real life. That is the magic of a virtual world where everything is possible! In real life the visitors pay 350 Rubel entrance fee and in Second Life it is not only free, they are getting artworks as gifts too. Peter Greenaway said at the press conference that this exhibition is an appreciation of the Avant Garde in a contemporary style. I am sure that most understood him talking about the Multimedia Installation and forgot that this style of art presentation is at least 50 years old.

The Avant Garde is here - here in Second Life!

For those who are not familiar with French: avant garde means vanguard. Virtual art and presentation is vanguard. And as always the audience does not take note of it. In hundred years there will come up an exhibition about the pioneers of virtual art. And the audience will shake the heads about the people at that time who could have enjoyed Virtual Art conveniently from home but missed it.

Here a machinima of the installation, taken by Sophia Yates: 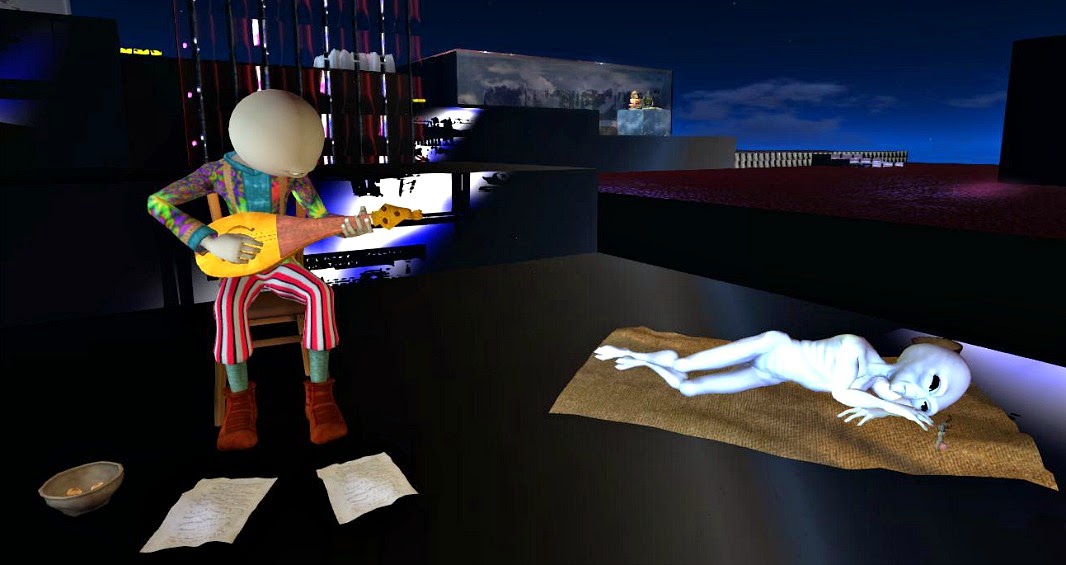 Lollito Larkham became a rare guest in Second Life. He is wrapped up in many other projects but currently takes part with one of the highlights of "The Philosophers Stone", an art exhibit at LEA17 which is still on my list to blog. 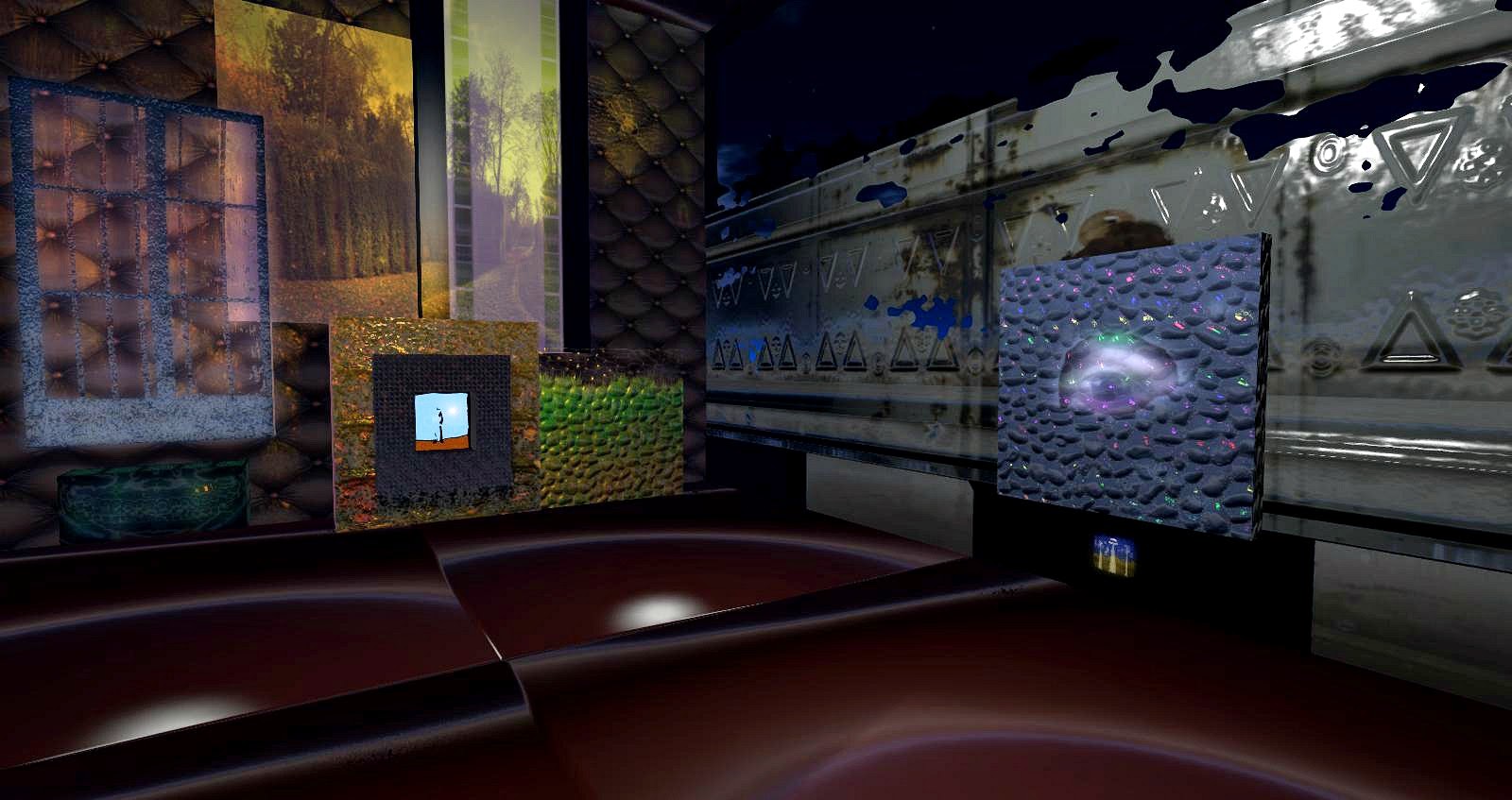 His small but exquisite installation at Tanalois shows Lollito's great strenght, the play with the possibilities to the extend. Here he used the new features of Advanced Lighting Model, shaders, materials and multilayered textures. Much too few artists are working with these new features and most are technically far behind the other designers in Second Life. Exploring a new art installation to me is often like a travel to the past. Always the same boring prims, sculpts and dead surfaces. But not with Lollito's works and thats why I missed him. Good to see him at least a bit back! 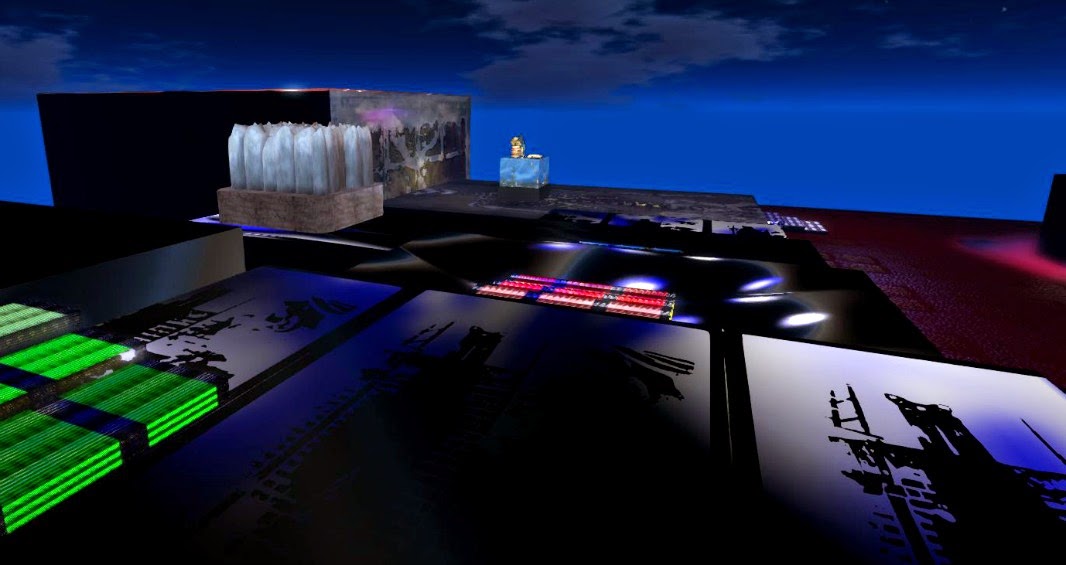 A joy to explore, but you should make sure to have Advanced Light enabled.

Taxi: http://lindenarts.blogspot.de/2014/03/the-philosophers-stone-lea17.html
Posted by Unknown at 18:01 No comments: 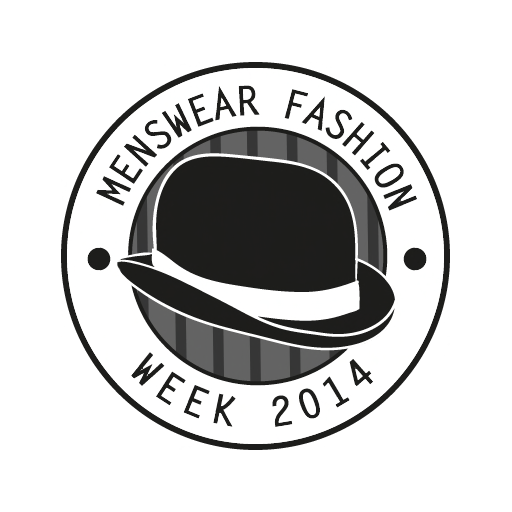 Compared to female fashion, men's fashion is a neglected business in Second Life. I hear often men complaining about it and since Scatterhert and I both love fashion, the MEN'S WEAR FASHION WEEK 2014 was a good reason for us to cover this event and to look for new trends which are matching our taste. We hope we encourage many male virtual couch potatoes to move their asses to the Fashion Week and to get rid of the old outfits. On closer look you will see that the variety of fashion is as wide as female. Encourage the designers by buying some new outfits. Many outfits are created for the event and not available anymore once the event is gone. Women love well dressed men ;)


The event has opened today and running until May 3rd with daily events, mainly fashion shows.
Find the schedule and designers list here: http://sirenproductionsl.com/menswear-fashion-week-2014-calender-designers/

We combined this post with a travel around the virtual world. Model: Scatterheart Aboma. Enjoy! 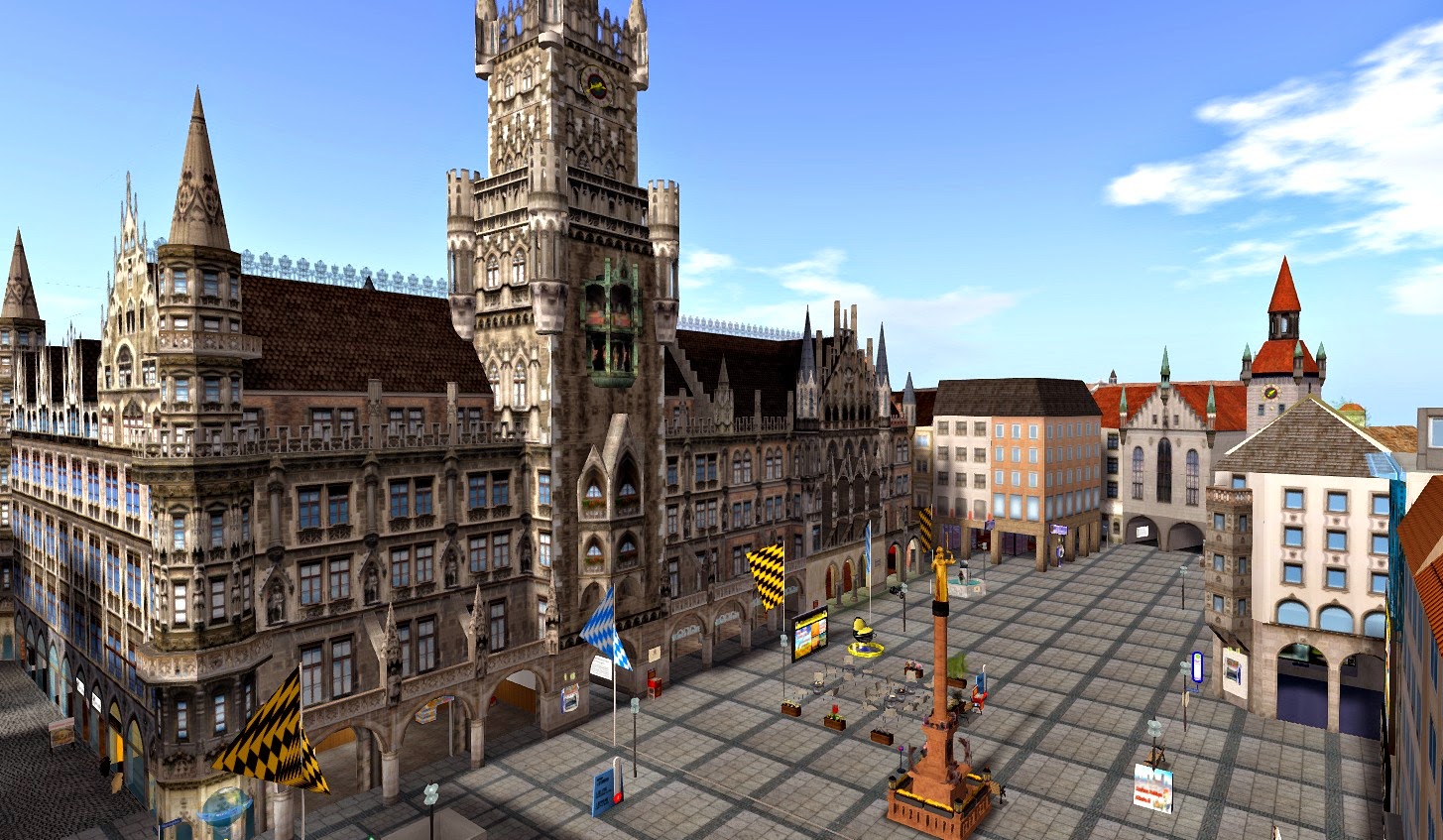 
And if you want to see more styles at the fair, have a look at the latest issue of Models magazine:

More about the event: http://sirenproductionsl.com/


Meilo Minotaur and CapCat Ragu made an intriguing installation At Lost Town. In the introduction to the installation they quote the french philosopher Pierre Lévy, who is one one of the few major philosophers working on the implications of cyberspace and digital communications, currently doing research on Collective Intelligence in the Internet. According to him "the virtual does not oppose the real. Virtuality is not about possibility, but about potency. The possible is just like the real but without an existence. There is no realization for the virtual, only the potency of what it may become. Virtuality is in the intangible moment between what was and what will be." 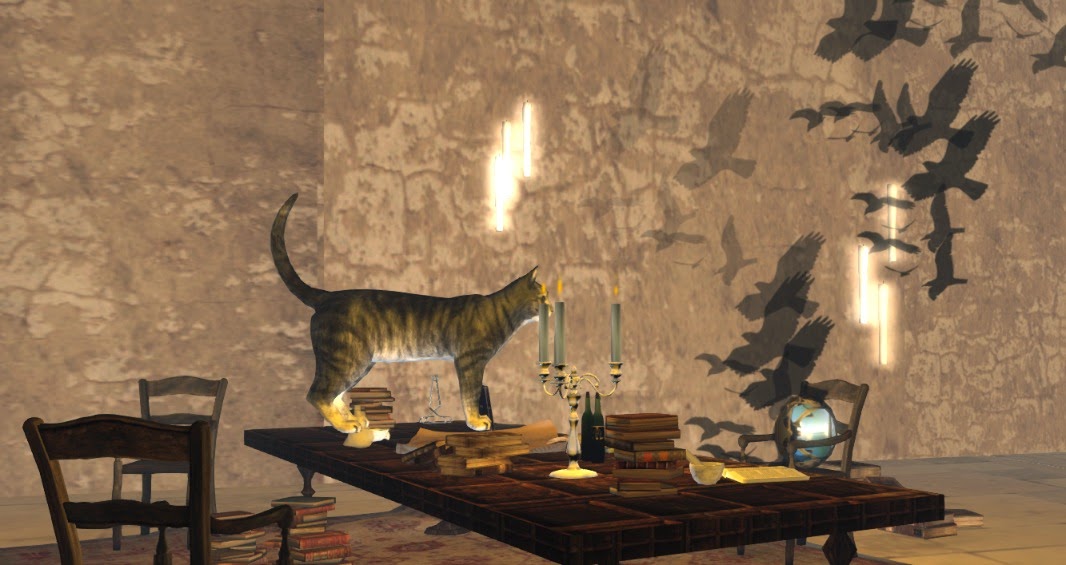 Although we sometimes have the impression the the internet rather emerges collective stupidity and even more malice, to me virtuality is more than that. 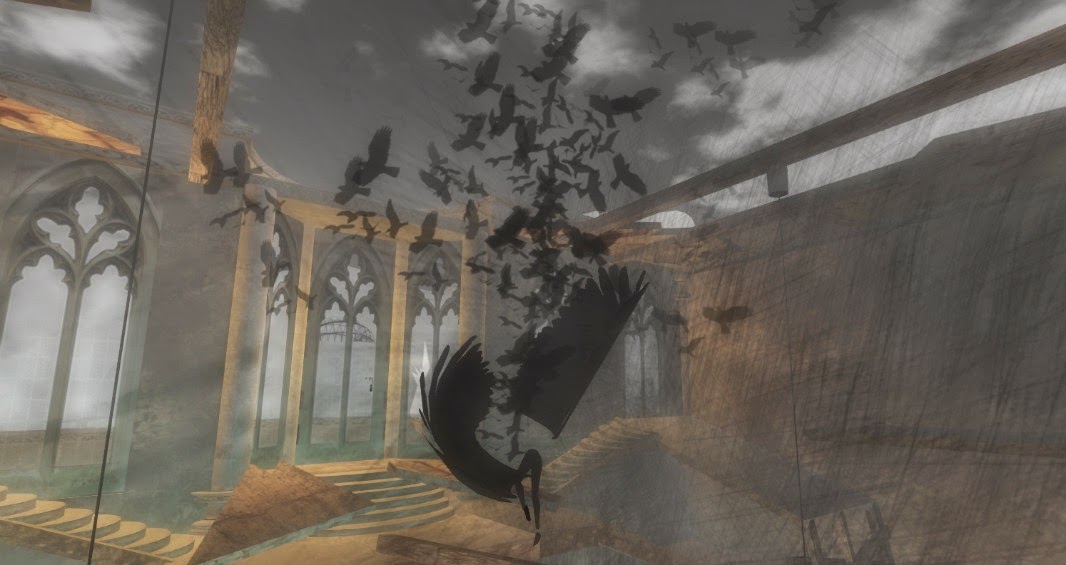 Virtuality is the outcome of our mind, the phantasies, the dreams, the hopes, the fears. The more we think about them, the more they become reality. Virtuality causes the reality. 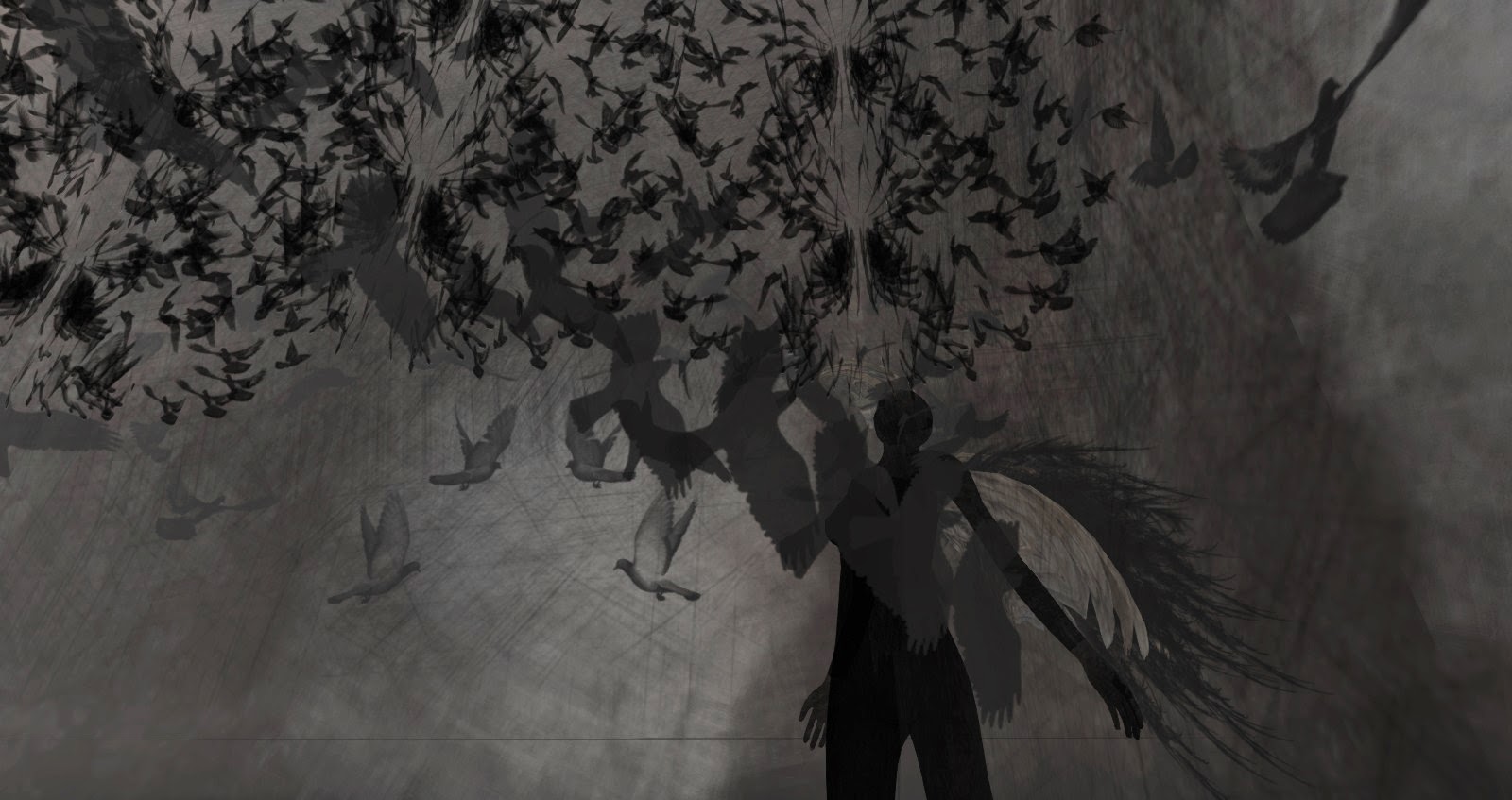 And in a virtual world we can go beyond the "reality". The installation is touching as it plays with dreams and fears. 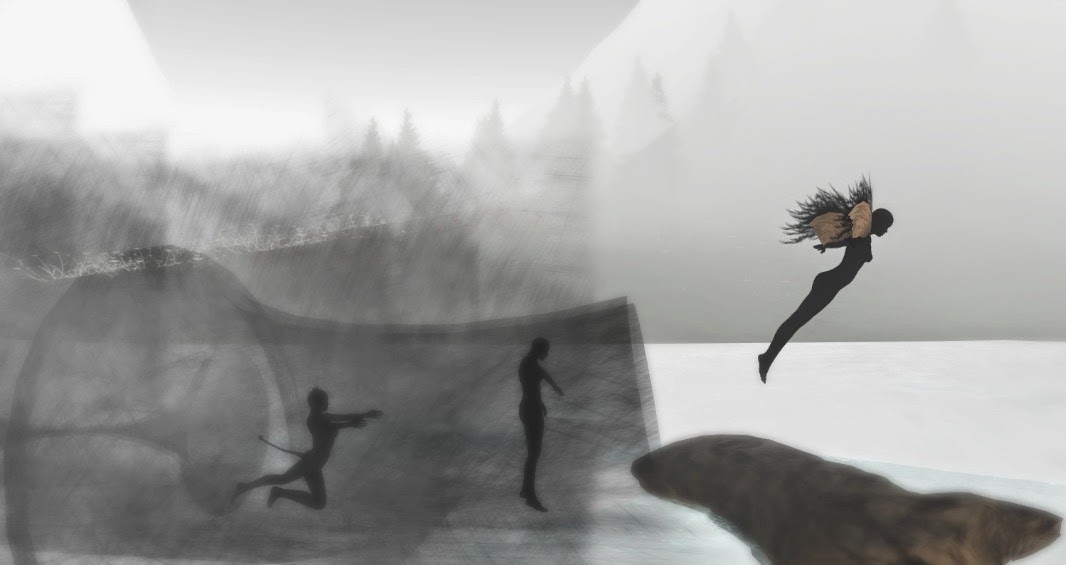 As a sweet Easter gift aside, the artists lefts four eggs with four bird avatars. The bird at the photo on top is one of them.


HAPPY EASTER!
Posted by Unknown at 10:13 No comments:

What would be the Easter Holiday with an event by Betty Tureaud and Ultraviolet Alter? It will be well visited as usually. Make sure to come early and enjoy betty's builds.